To see further ahead and view events for the next two years, join musicLINK today!

Ensemble Hesperi will be playing a very varied selection of Baroque music including pieces by Corelli and Handel, alongside lesser-known gems from eighteenth-century Scotland.

Tickets £18.  Free tickets are available for students in full-time education and schoolchildren accompanied by an adult but please book them in advance.

There is on-site parking and easy access to the auditorium.

Please visit the website www.nottinghamharmonic.org for further details, or go directly to the ticketing page https://trch.co.uk/whats-on/the-messiah/

To drive the cold winter away....journey back in musical time with the early music ensemble, Sixteen85.

Sixteen85 invite you to a relaxed winter evening of "seasonal" songs and instrumental music drawn from the 13th through to the 19th century.

Their programme will include familiar carols, up-beat seasonal songs, jolly Tudor instrumental dances (featuring crumhorns), showpieces for recorders and harpsichord, tuneful trio sonatas, beautiful solo songs and more.  Ensemble members will briefly introduce the instruments, and the music, and are always happy to talk further with audience members after the concert.

Available at the Box office 01507 600350 or online at www.louthriverheadtheatre.com

Seasonal refreshments will be served.

Both are well-known and accomplished performers in Horncastle, notably with the Choral Society. Lion Theatre and St Mary's Church, where Chris is the organist. Soprano Gail enjoys music of all kinds and her songs are sure to lead you into the winter festivals with a flourish and plenty of seasonal sparkle.

A concert of carols, traditional and less familiar.  The ever-popular Christmas concert from this local four-part choir.

Tickets are £5 including refreshments.

The SIMFest Ensemble will come together for this concert of string chamber orchestra works including Tchaikovsky's Serenade for Strings and Stravinsky Concerto for Strings.

You can book online at www.stamfordartscentre.com. The phone lines are open Monday to Saturday from 10am to 2pm and 1 hour before shows and films. In person tickets can be purchased Monday, Wednesday, Friday & Saturday 10am - 2pm and before every event. 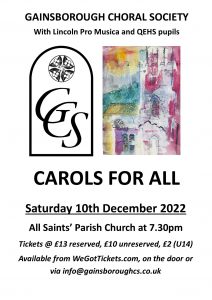 Tickets available on door for £10, under 16's enter free of charge. Includes a finger buffet at the interval. Wine and soft drinks are available, not included in ticket price.

The Blue Room, The Lawn, Lincoln

Available from Guildhall Box Office, A H Music, Society members and on the door

You can book online at www.stamfordartscentre.com. The phone lines are open Monday to Saturday from 10am to 2pm and 1 hour before shows and films. In person tickets can be purchased Monday, Wednesday, Friday & Saturday 10am - 2pm and before every event.

Bring the whole family to enjoy Christmas music at these ever popular, child-friendly concerts. The choir and band lead the audience in well-loved Christmas carols, while the choir provides more peaceful interludes with celestial carol settings. The Thoresby Colliery Band adds sparkle with its solo items.

Please visit our website www.nottinghamharmonic.org for further details, or go directly to our ticketing page https://trch.co.uk/whats-on/family-carol-concert-2/ 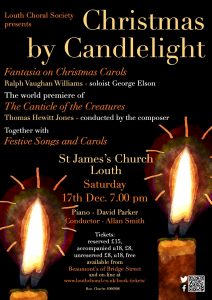 A delightful candle lit evening of Christmas themed music with audience participation and also featuring the world premiere of our recently commissioned work,  ‘The Canticle of the Creatures’ composed and conducted by Thomas Hewitt Jones.

We are also delighted to welcome local up and coming baritone, George Elson who will take the solo spot for R. Vaughan Williams' 'Fantasia on Christmas Carols'.

Thomas Hewitt Jones is an award-winning composer of contemporary, classical and commercial music. He is probably best known for his commission by the Royal School of Church Music to write the RSCM Platinum Jubilee Anthem ‘In Our which Service’. He won BBC Young Composer Competition in 2003 and since then his music has been produced by many major music publishers and is frequently heard in concert and on radio, TV and cinema. His music is regularly featured on Classic FM, including most recently his violin concerto ‘Christmas Party”. His composition, “Canticle of the Creatures“ has been commissioned for Louth Choral Society and will be performed for the first time at this Christmas concert.

George Elson, a singer and instrumentalist from Alford, Lincolnshire. He studied at QEGS Alford, secondary school and sixth form, where he often played roles in the school shows such as Raoul (Phantom of the Opera) and Billy Flynn (Chicago). George is now studying Vocal Studies and Opera at the Royal Northern College of Music in Manchester where he sings early music, art songs, and choral works in addition to playing jazz clarinet in his free time.

Available at www.louthchoral.co.uk/book-tickets or from Beaumont's Bridge Street, Louth